With Robert Maras (2,15 Meters) and Mario Kasun (2,13 Meters), the OPEL SKYLINERS now have two big young Men under the Boards. Mario Kasun was a member of the Croatian Youth Nationalteam in 1998-1999. A lot of Coaches believe that he can go all the way to the NBA if he keeps on working hard. Kasun played College Ball in the United States for the Gonzaga Bulldogs and knows the game well.

"Mario is a very athletic player with high potential. He's got enormous Skills and we are happy to have him here now. I think it will take some time to get him started but with him, our team will be even deeper."

"Mario fits well in our plan. Establishing a European Top-Team here in Frankfurt is our main goal. We gave him a long contract because we believe that he has a lot of potential. He has only practiced but did not play the last two years. Therefore we have to be patient and shouldn't expect to much from him now."

The OPEL SKYLINERS will be Mario's second stop in Germany. The Center signed with RheinEnergy Cologne at the beginning of the last season but did not play due to Contract Problems with his former team KK Zrinjevac Zagreb. Mario did not play a single professional game in the last 24 months.

Between 1997-98, Mario played for Gorica ( 2.Division Croatia ), then joined KK Zrinjevac Zagreb ( 1.Division Croatia. He left in 2000 to join the NCAA College Team of the Gonzaga Bulldogs. 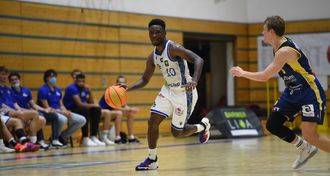