From the very beginning on, a highly tense and thrilling game had been evolving at the Kölnarena, in which our team from Frankfurt stayed one step ahead over almost the entire course of the game. Close to the end of the third quarter RheinEnergie Cologne had finally cut the lead down and even pulled out a 63-60 lead. And yet, with only one minute remaining in the third period Pascal Roller and Andy Kwiatkowski responded with two shots from the three point line making the score 63-66.

Mario Kasun, Robert Garrett and Robert Maras went into the last quarter with four fouls each. In addition, Travis Conlan and Jukka Matinen both had already been charged with two fouls. Not the best conditions to go into the last ten minutes ... An absolutely dramatic closing period developed at the Kölnarena. With only 1:45 remaining in the contest Pascal Roller drilled an amazing eight-meter distance shot from beyond the arc at the buzzer for a 6-point cushion, 74-80. However, Cologne did not get tired of opposing and responded with another two three-pointers by Hammink and Harrison tying the game at 80-80 with 52 seconds left.

Right after, Mario Kasun scored one of two free throws - 80-81 in favor of Frankfurt. Cologne then misses the next shot, Frankfurt saves the rebound and draws a foul. Pascal Roller at the line. At that point, there was no holding the OPEL SKYLINERS fans anymore, who had travelled with the team for support. However, all calm and concentrated, Pascal Roller hit 2-of-2 free throws. The score now 80-83. At 1,1 seconds left on the clock Travis Conlan fouls C.C. Harrison from RheinEnergie, who only makes one of two. Mario Kasun again with another rebound - and the game is over. The OPEL SKYLINERS win by 81-83. 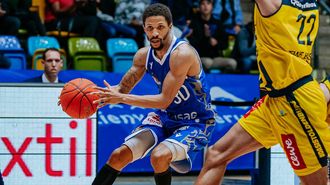 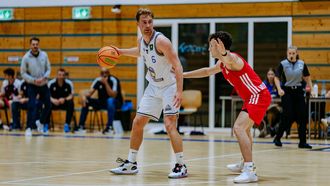 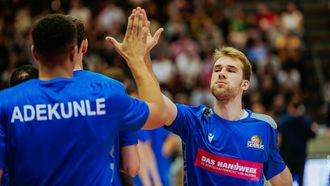