The Opel Skyliners are back as with a 76-99 road win in the German cup quarterfinals at s.Oliver Würzburg and clinched its Top 4 berth for the third year in a row after winning the Cup in 2000 and making it into semifinals last season. The game was a typical cup-fight with a lot of changes in the lead throughout three quarters. After Würzburg climbed to 10-7, the Skyliners hit a 2-9 run to jump into 12-16. The first quarter ended with a 22-22 tie.

Frankfurt pulled away 24-30 in the second, but the hosts came back again after 14 minutes 33-32. Robert Maras and Chad Austin helped Frankfurt to take a 44-48 halftime lead but the forwards were hot for both sides. While Eric Poole led the way for Würzburg, Marcus Goree once again showed his leadership for Frankfurt.

The third quarter also had a lot of changes in the lead and guard Denis Wucherer, recently signed by the Skyliners from Würzburg, closed the period with a three that built a 64-70 score for Frankfurt. The Skyliners stormed out in the last quarter, scoring six straight points with no reply from the other side, which forced Würzburg to call a time out.

The hosts did not have many options left as they were running out of time and Frankfurt, playing without Center Virgil Stanescu due to foot injury, never got in trouble thereafter.

Midway through the quarter, headcoach Gordon Herbert took off his starters to give his bench players some time on court. The final result was 76-99 and the team from Frankfurt seems to be back on track.

Marcus Goree led all scorers with 24 points together with 9 rebounds. Chad Austin scored 21 and Denis Wucherer followed with 17 and 9 boards. 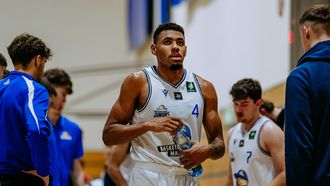